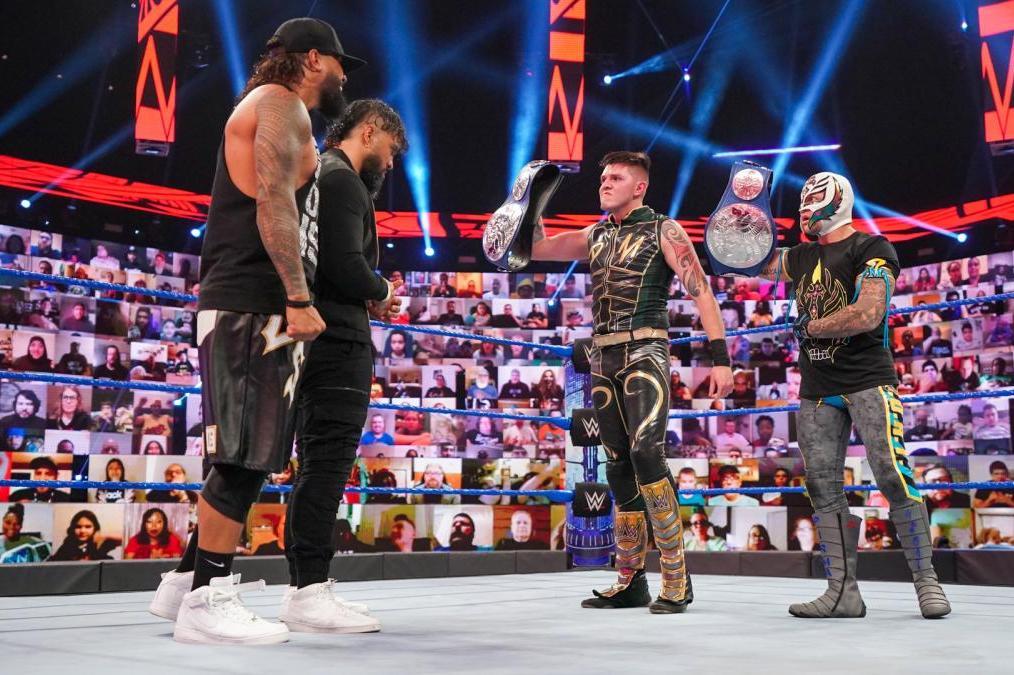 If you like rematches, Friday’s WWE SmackDown delivered in a big way.

Not only did we see Kevin Owens take on Apollo Crews for the Intercontinental Championship again, but we also saw The Usos challenge Rey and Dominik Mysterio for the tag titles twice in the same night.

After Jimmy lifted his shoulder during a pin in the opening bout, WWE management granted him and Jey a second shot in the main event.

Liv Morgan returned to singles action following the release of her tag team partner, Ruby Riott. She took on Carmella in a losing effort.

We also saw Alpha Academy begin a new feud with The Street Profits, and Sami Zayn continued his rivalry with Owens by literally kicking him when he was down.

Let’s look at some of the biggest moments from SmackDown and where they could lead in the future.

Reigns came out at the top of the show and talked about how he had changed his position on The Usos getting a tag title shot. He supported his cousins’ efforts but warned them of what could happen if they lose.

Jimmy still seemed hesitant to fall in line when The Tribal Chief asked to be acknowledged, so the family friction was still palpable.

Rey and Dominik came out right away so that this match could be the first of the evening. Michael Cole mentioned that WWE was celebrating 50 years of tag team champions this year while putting over these teams as two of the best on the roster.

When Dominik rolled up Jimmy, the ref did not see that Uso got his shoulder off the mat and counted the pinfall. The announcers called attention to it right away, so it seemed like an intentional part of the story. An angry Reigns demanded Heyman bring The Usos to him at once so he could yell at them.

The Tribal Chief told them they embarrassed the family and demanded they make things right. Adam Pearce and Sonya Deville reviewed the footage and booked a rematch for the same night.

As Dom and Rey were preparing to win again, Reigns came out of nowhere to take out the younger Mysterio with a Superman Punch. Rey tried to defend his son but The Tribal Chief easily dispatched him too.

Jimmy and Jey watched as Reigns singlehandedly destroyed both Mysterios. Jimmy tried to talk him down as he choked out Dominik. As Jimmy left, Reigns continued to take out his frustrations on Dom.

The Usos and Reigns still have a lot of issues to work out, and Rey is going to be looking to get revenge against The Big Dog for hurting his son. Without any other clear challenger, it’s possible Rey and Reigns could collide for the Universal Championship at Hell in a Cell on June 20. If that happens, Rey had better take out a big insurance policy just to be safe.

WWE releasing Ruby Riott a few days before SmackDown came as a shock to many people, not least her tag team partner. Morgan is now a solo act, but it doesn’t look like anything else has changed.

When we say nothing has changed, we are referring to the way she is booked. Morgan has one of the worst win-loss records in WWE in 2021.

That trend continued Friday when she lost to Carmella. After she won, Mella demanded the announcer bill her as the most beautiful woman in WWE.

While The Princess of Staten Island appears to be getting a new push, Morgan has been underused and ignored by management. It’s a shame because she has improved every aspect of her game to become a well-rounded performer.

It’s unclear what WWE has planned for Morgan, if anything. With Sonya Deville working a non-wrestling role and Mia Yim yet to debut on the blue brand, SmackDown only has seven active performers in the women’s division. Sasha Banks has yet to return from her hiatus, so that brings it down to six.

At some point, Morgan is going to have to be taken seriously unless WWE plans on using the same few women in the title picture. Let’s hope that time comes sooner rather than later.

Montez Ford and Angelo Dawkins were hanging out backstage when Chad Gable tried to offer them some advice. As you would expect, the Street Profits were not receptive to his critiques.

Later in the show, Otis approached them and said they should apologize to Gable for insulting him. Ford and Dawkins told him to mind his own business and reminded Otis that he hasn’t done anything of note since aligning with Gable.

The Dozer lived up to his nickname and ran over both men with ease, kicking off what is sure to be a feud that will produce some great matches.

With Robert Roode, Dolph Ziggler, The Usos and Mysterios fighting over the tag titles, these teams have been pushed aside. It’s nice to see WWE keeping them relevant with their own storyline.

We will likely see Gable and Otis battle The Street Profits on an upcoming edition of SmackDown and probably a few times after that seeing as WWE has been running a lot of rematches recently.

As Kevin Owens was walking backstage, Commander Azeez attacked him before his match with Crews for the Intercontinental Championship.

Azeez was banned from ringside but still found a way to have an impact on the result. KO tried his best, but the injuries he suffered prevented him from building momentum.

Owens made a late comeback, but it wasn’t enough to help him win. After enduring a lot of punishment, Crews put him away with a fireman’s carry slam on to the apron.

As KO struggled to get to his feet, Sami Zayn ran down and delivered a Helluva Kick. This is a good indicator that Crews can move on from Owens because he will be feuding with Zayn again.

The longtime rivals will likely clash at Hell in a Cell. Even though we have seen these two fight many times, they always manage to make it entertaining. This time should be no different.

Friday’s SmackDown was a little on the repetitive side with some of the rematches, but it still managed to be a decent show with a couple of standout segments.

Denial of responsibility! NewsUpdate is an automatic aggregator around the global media. All the content are available free on Internet. We have just arranged it in one platform for educational purpose only. In each content, the hyperlink to the primary source is specified. All trademarks belong to their rightful owners, all materials to their authors. If you are the owner of the content and do not want us to publish your materials on our website, please contact us by email – [email protected]. The content will be deleted within 24 hours.
Loading...
best sports newsconflictedDestroysfalloutMysteriosnews update sportsnewsupdatereigns