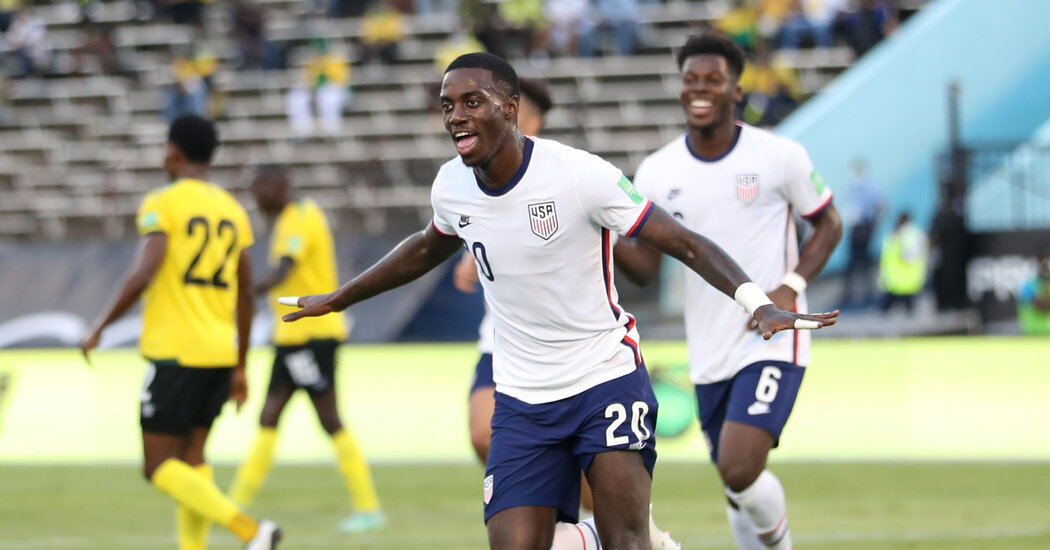 How do you keep your buzz going after an electrifying win over your fiercest rival in front of a raucous home crowd?

How do you keep that momentum alive days later in a nearly empty stadium, on a pockmarked field, a thousand miles from home?

Those were the questions for the United States men’s national soccer team on Tuesday night as it lined up to face Jamaica in its eighth qualifying match for the 2022 World Cup, four days after a thrilling, emotionally draining victory over Mexico.

And for 90 or so minutes in Kingston, the Americans never really came up with answers, looking mostly spiritless in a 1-1 draw.

U.S. Coach Gregg Berhalter had warned his players about letting their energy dip after their big win over Mexico.

“In the coaching world you talk about trap games,” he said before the match. “You talk about putting that last game behind you, and the next game is the most important game.”

He called this meeting against Jamaica a “massive game.”

But neither the team’s play nor the atmosphere reflected that premise.

The stands were mostly empty as a result of pandemic restrictions, and the match played out on a dry, tattered field that grew increasingly shredded as the minutes progressed.

On the ragged grass, each team was at least able to each create one moment of beauty.

In the 11th minute, a give-and-go with Ricardo Pepi sent Timothy Weah skipping dangerously into the penalty area, where a crowd of Jamaicans awaited. But Weah kept going, dancing through a pair of defenders, keeping his balance while tiptoeing around a last-gasp challenge, before flicking the ball with his left foot off the far post and into the net.

Weah said the game had special meaning for him: His mother’s side of the family is Jamaican, and his aunt was at the game.

“My parents, they talked to me about it,” Weah said before the game. “They said don’t go too hard on their country. But obviously business is business.”

Jamaica meant business, too. Michail Antonio, the third-leading scorer in the English Premier League, evened the score in thrilling fashion only 11 minutes later when he dribbled into a cubbyhole of a space more than 30 yards from the goal and decided to blast a speculative shot toward the net. The ball scudded over the outstretched arms of American goalkeeper Zack Steffen and under the crossbar, sparking cheers from the sparse, happily stunned crowd.

Jamaica had been flat through the first seven games of World Cup qualifying, accumulating just six points. But the United States has historically struggled to make an impact in Kingston, having compiled just one win, one loss and four draws in its previous six World Cup qualifying games in Jamaica before Tuesday.

The Jamaicans lacked ambition and ideas at times on offense, but they made up for it with a level of physicality bordering on roughness. They appeared to take the lead in the dying minutes of the game when Damion Lowe scored on a header. But he was whistled for a foul (which replays showed to be questionable) on the play, which negated the goal.

The United States looked pedestrian too, particularly in the midfield, where the presence of Weston McKennie, who missed the game because of yellow card accumulation, seemed to be missed.

Christian Pulisic, who is still working his way back to fitness from a high ankle sprain, entered the game as a substitute with about half an hour to go. Coming into the game in a similar situation on Friday, he headed in the go-ahead goal.

But he failed to conjure any salve for the Americans’ problems on Tuesday night, leaving the United States wondering where all the energy and urgency went.

Denial of responsibility! NewsUpdate is an automatic aggregator around the global media. All the content are available free on Internet. We have just arranged it in one platform for educational purpose only. In each content, the hyperlink to the primary source is specified. All trademarks belong to their rightful owners, all materials to their authors. If you are the owner of the content and do not want us to publish your materials on our website, please contact us by email – [email protected]. The content will be deleted within 24 hours.
best sports newsdrawFallsFlatMexiconews update sportsnewsupdatesports news