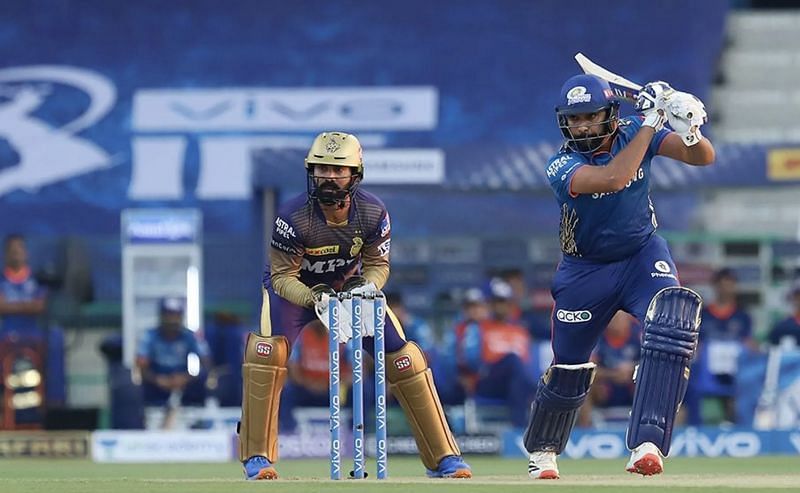 Mumbai Indians (MI) skipper Rohit Sharma lamented that his side couldn’t capitalize on a solid start as they suffered a seven-wicket defeat against Kolkata Knight Riders (KKR) in the 34th match of the Indian Premier League (IPL) 2021, in Abu Dhabi.

Asked to bat first, the defending champions added a 56-ball 78-run stand for the opening wicket before Rohit Sharma fell for 33. His partner Quinton de Kock carried on a scored a 42-ball 55. They managed only 155, a total that KKR chased in 15.1 overs.

“Few areas (went wrong). We started really well but didn’t get enough towards the back end. I thought it was a good pitch; we failed to capitalize on the start we got and didn’t bowl well at the start. We spoke about being on the stumps and letting the batters take chances. However, that didn’t happen. Things like that can happen, and I don’t want to look into it too much. You have to move on,” said Rohit Sharma in the post-match presentation ceremony.

MI failed to stitch up decent partnerships after the opening stand. Kieron Pollard and Krunal Pandya added 30 off 18 balls, but it wasn’t enough for them to set a challenging total. Pointing out that MI flouted the basics, Rohit Sharma added:

“The basics of cricket is that you make small partnerships. After a good start, we had to get small partnerships, but we kept losing wickets at regular intervals. It is not easy for new batters to go in and start hitting the ball. It is something that happened in the last game as well, and we will address it.”

The consecutive defeats for MI since the resumption of the IPL 2021 have pushed them to sixth spot in the points table with four wins from nine games.

Rohit Sharma is now the first player to score 1000 IPL runs against a team. Very ironically, his IPL journey started with a duck on debut against KKR, out to Murali Kartik in 2008.
#IPL2021 #MIvKKR

Rohit Sharma is now the first player to score 1000 IPL runs against a team. Very ironically, his IPL journey started with a duck on debut against KKR, out to Murali Kartik in 2008.
#IPL2021 #MIvKKR

Hopefully, we will win some games on the trot: MI skipper Rohit Sharma

Rohit Sharma remains hopeful that MI will be able to win matches on the trot to make it to the playoffs. Despite their reputation for being slow starters, MI have a history of finding ways to peak at the right time.

“The points table is always there at the back of the mind on where you stand, we are still in the middle of the table, so we have to get back and fight and hopefully get some wins on the trot,” Rohit Sharma further added.

The five-time IPL champions will face third-placed Royal Challengers Bangalore on Sunday at the Dubai International Stadium. In a much-anticipated clash, two bigwigs of Indian cricket – Rohit Sharma and Virat Kohli – will face off.

Denial of responsibility! NewsUpdate is an automatic aggregator around the global media. All the content are available free on Internet. We have just arranged it in one platform for educational purpose only. In each content, the hyperlink to the primary source is specified. All trademarks belong to their rightful owners, all materials to their authors. If you are the owner of the content and do not want us to publish your materials on our website, please contact us by email – [email protected]. The content will be deleted within 24 hours.
best sports newscapitalizeCricketFailedIPLIPL 2021ipl 2021 newskolkata knight riders