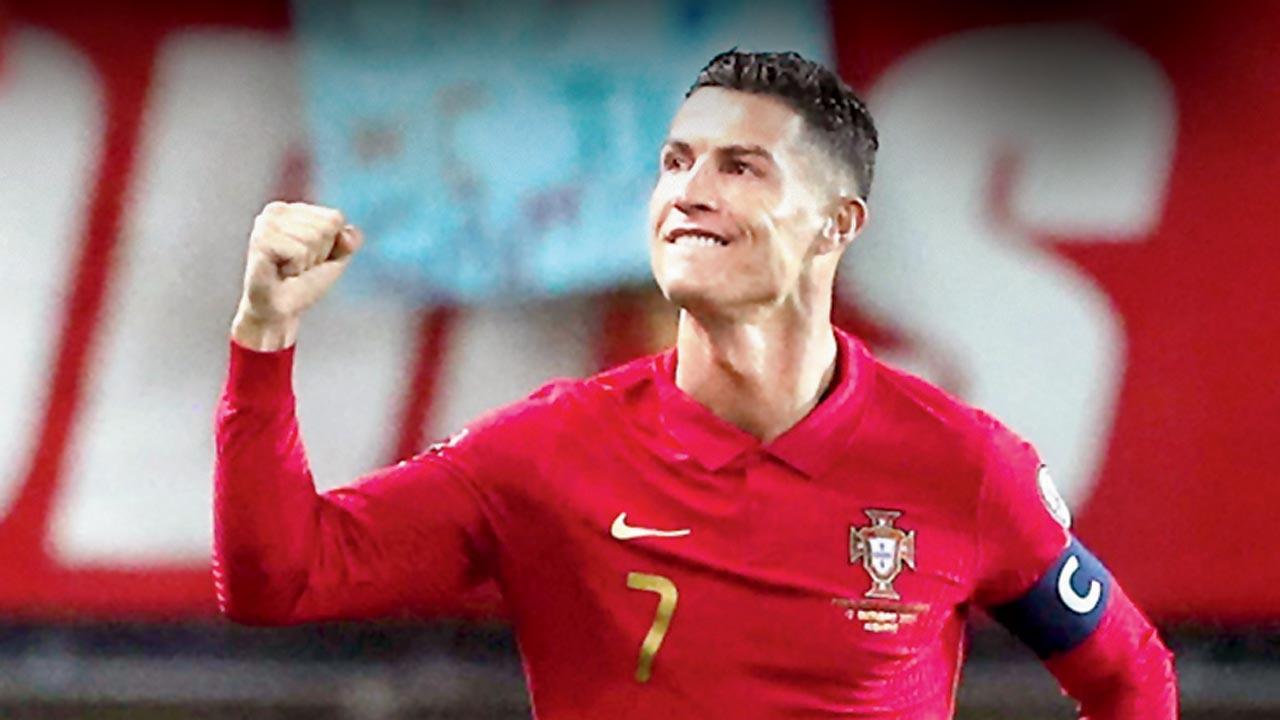 Another hat trick for Cristiano Ronaldo, another win and qualification for the World Cup for Denmark. And yet more crowd trouble in a game between England and Hungary.

There was a sense of familiarity to the World Cup qualifiers in Europe on Tuesday, not least in Faro where Ronaldo extended his men’s record tally of international goals to 115 by scoring the 58th hat trick of his career for club and country in Portugal’s 5-0 win over Luxembourg.

Denmark became the second European nation to qualify for next year’s tournament in Qatar, after Germany on Monday, by securing an eighth straight win in group play by beating Austria 1-0.

The decisive win sealed by Joakim Maehle’s second-half goal came at the Parken Stadium in Copenhagen where star playmaker Christian Eriksen collapsed in June during a European Championship game. It is still unclear if Eriksen can resume his career to play at the World Cup in 13 months’ time.

England is likely to be there, but was made to wait before booking its place after being held to a 1-1 draw by Hungary at Wembley Stadium. Events on the field were overshadowed by clashes between police officers and Hungary supporters at the start of the match, sparked “according to police” by a visiting fan making “racially aggravated” comments toward a steward.

Disorder by Hungary fans including racism during the first group match between the teams, in Budapest last month, led to the Hungarians having to play a game in an empty stadium.

Sweden climbed above Spain into first place in Group B with a 2-0 win over Greece, and Switzerland moved level on points with Italy in Group C with a 4-0 victory over Lithuania.

In Group A, Portugal is a point behind Serbia, which beat Azerbaijan 3-1, but has a game in hand. Only the top team from each group qualifies automatically for the World Cup. The second-place finishers go into the playoffs.

A pair of penalties, in the eighth and 13th minutes, set Ronaldo on his way to a record 10th international hat trick for Portugal that was completed in the 87th minute. The Manchester United striker, 36, was playing his 182nd international game.

Bruno Fernandes and Joao Palhinha also scored for Portugal in its fourth straight win in qualifying, which left a straight shootout with Serbia for first place.
Serbia’s last game is at Portugal, which will first play its game in hand away to Ireland.

Denmark is continuing its good form from the European Championship, where the team surged to the semi-finals despite losing Eriksen in distressing circumstances in the opening game.

The clean sheet against Austria meant the Danes have yet to concede in Group F, while they are the only team with a 100&#37 record in qualifying.

Maehle scored with a sweeping shot that was teed up by Thomas Delaney’s direct run, taking Denmark to 27 goals, second only to the Netherlands.

Denmark holds an unassailable seven-point lead over Scotland, which is still on track to finish runner-up after a 1-0 win at the Faeroe Islands. Scotland is four points clear of third-place Israel, which beat visiting Moldova 2-1.

This story has been sourced from a third party syndicated feed, agencies. Mid-day accepts no responsibility or liability for its dependability, trustworthiness, reliabilitsy and data of the text. Mid-day management/mid-day.com reserves the sole right to alter, delete or remove (without notice) the contents in its absolute discretion for any reason whatsoever

Denial of responsibility! NewsUpdate is an automatic aggregator around the global media. All the content are available free on Internet. We have just arranged it in one platform for educational purpose only. In each content, the hyperlink to the primary source is specified. All trademarks belong to their rightful owners, all materials to their authors. If you are the owner of the content and do not want us to publish your materials on our website, please contact us by email – [email protected]. The content will be deleted within 24 hours.
best sports newsCristiano Ronaldofootball matchfootball newsfootball score updatesFootball scoresFootball Soccer Newshot

Charles Barkley makes fun of Wayne Gretzky NHL fight: ‘Did you lose to a guy with a perm?’

“He needs to strap on a pair and sign the…